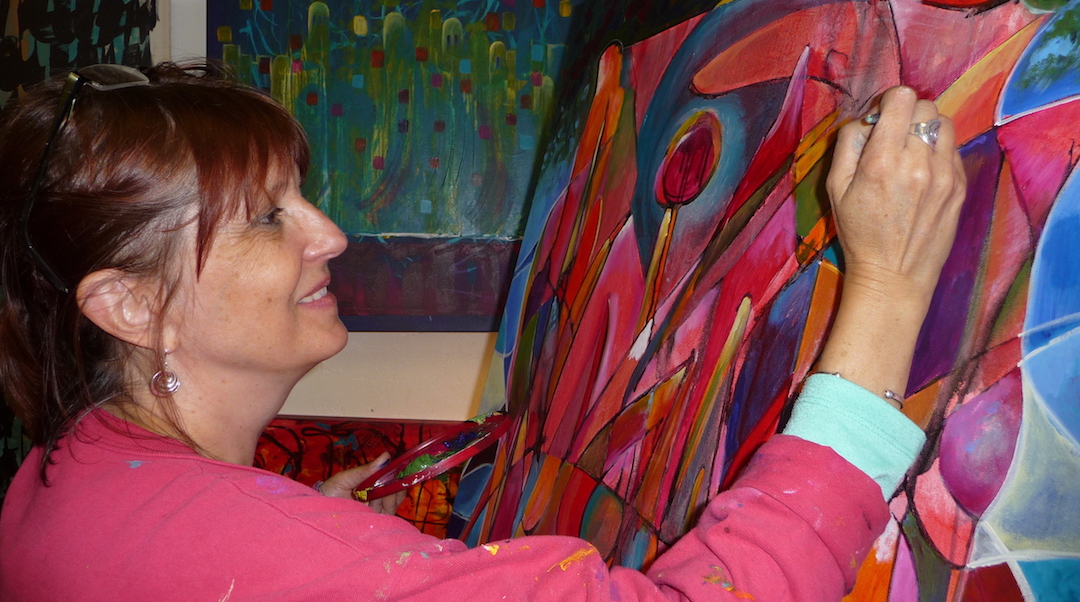 The artist at work

Louise-Marie was born in Quebec City on the shores of the mighty St. Lawrence River. As a child, she learned to draw at her mother's side while her mother painted. A neighbour woman taught local children to play through painting and drawing by providing an environment that nurtured both technique and experimentation. For Louise-Marie, this safe haven would allow for the emergence of certain techniques that continue to be evident in her work today. The 1970s was a period of women’s liberation, a dynamic time of discovery and awareness for women in the western world. It was also a period during which Louise-Marie’s family would be redefined. With her parents no longer in living the same city and sometimes not even in the same country, her life became divided between Canada, Algeria, Switzerland and Senegal.

Louise-Marie‘s canvases are a testimony to these moments of rupture, but also to the presence of nurturing and resilient women from all over the world who shared their struggles for autonomy. As witnessed in her paintings, Louise-Marie was influenced by the turmoil that punctuated their lives; their search for autonomy, their intimate struggles, their resilience along with their capacity to nurture and develop an inner life. These recurring themes are reflected in Louise-Marie’s work through the presence of her fluid lines and depictions of water, vegetation and the moon and through a strong sense of veiling and transparency that evoke the layers, or multiplicity of the self. In high school, she attended art classes taught by  Paul de Broeck. His teaching style encouraged students to push themselves to surpass self-imposed limits, to develop their own sense of truth and to recognize a path in life that was uniquely their own. Louise-Marie’s quests took her on an inward journey, one that was characterized by specific lines and colours. Throughout her studies of Ceramics, Textiles, Painting and Drawing, Louise-Marie was drawn to texture and form as her personal style began to evolve. Through the guidance of teachers such as Louis Couture, she was awakened to her need for artistic expression through paint and the richness of pigment. More recently, she studied with Morin St-Georges, Seymour Segal and Renée Duval who helped her refine her artistic vision by adopting new creative processes that helped to synthesize coherence with complexity. Louise-Marie’s academic background might be considered unconventional:  philosophy, business administration (MBA) and visual arts. The juxtaposition of these diverse disciplines has enabled her to combine complementary skills (abstraction and pragmatism) that are essential to her ability to take action.  With these skills, and following in her father’s footsteps, she pursued a  career in economic development followed by a career in international development. Missions in Latin America and Africa continued to nourish her perception of women’s serenity, strength, and solidarity along with their ability to reinvent their place in the world. Louise-Marie adheres to the vision of Djemila Benhabib who, in her magnificent book, Women in Spring, emphasizes that “whatever our point of departure on this planet… the destiny of some depends on that of others.” Thus, in the artist’s paintings, we see caravans of women, silhouettes wrapped in the folds of colour fabrics, all marching to the same destination: women’s faces; faces that reveal hope and the promise of light.

Louise-Marie now lives with her husband in Montreal. She also has a studio in Sainte-Thècle, Mauricie. She is the mother of three children who have now taken flight and are considered, “the three most beautiful works of my life”. 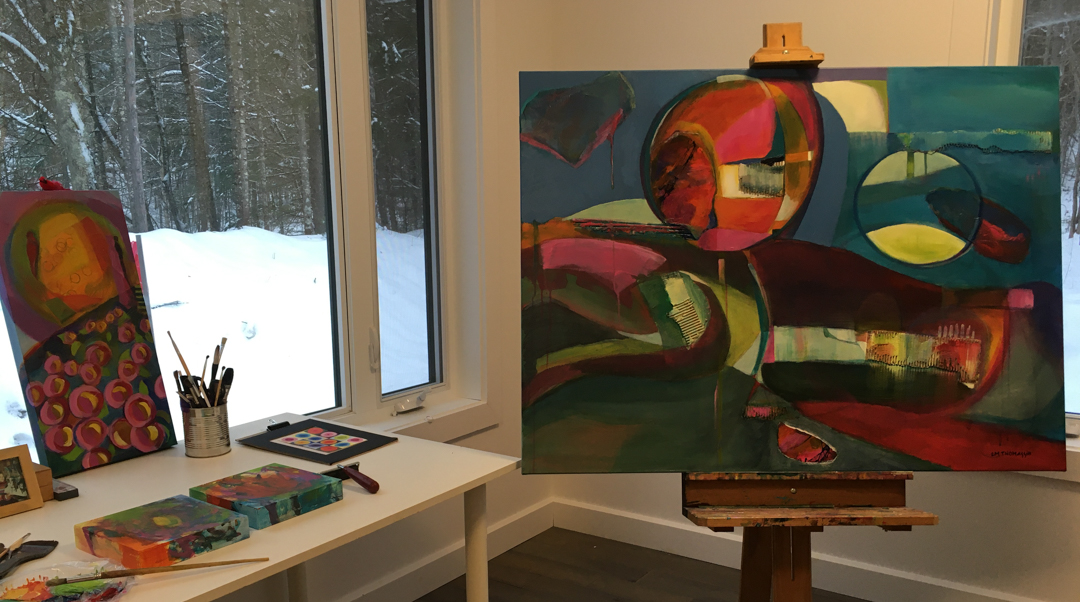 I usually work with charcoal, pastel and acrylics. I begin by drawing charcoal curves and spontaneous lines without worrying about the subject or the shapes that emerge. I then wet the canvas with water and observe the way the water extends the charcoal lines and creates more subtle shapes that evoke silhouettes or pathways. These spaces make up the structure of the painting that will be filled in with different colours. I then use paint to colour in certain spaces of this structure, only worrying about the effects and interaction of colours. Taking a step back, I observe the relationship between the ranges of colours, especially in terms of  their size and tone . Then, using dry pastels, I draw some more: dividing some  spaces while grouping other spaces together to create a variety of small and large shapes.  Finally, by glazing with successive layers of transparent paint, I create  dynamic relationships between the light and dark shapes and add more depth to the work through layers of  superimposed transparent colour.

My research aims to evoke temporality and to show the changes that take place over time in individual and collective consciousnesses. Inspired by Kandinsky's colour theory, I use colour games to create a dynamic movement that gives my subject’s temporality. To me, the light colours symbolize a radiance towards the future, while the darker hues suggest the past and anteriority. In the same way, the interplay of size and shape symbolize the contrast between individual actions and the profound changes in society. The “push and pull” between the major and minor shapes—along  with the more amorphous shapes that I use in my work—evokes the way that individual actions that one believes to be ephemeral, still contribute to all of human existence in a meaningful and continuous manner.  It’s a reminder that each individual action belongs to the greater common trajectory of human thought and aspiration, and that the most fruitful struggles are those that are founded on the commitment of the generations that  preceded us.

You can unsubscribe at any time.

Thank you for your registration.

Your information will be kept confidential.

You can unsubscribe at any time.

Thank you for your registration.

Your information will be kept confidential.